By: Manon Ress
In: News 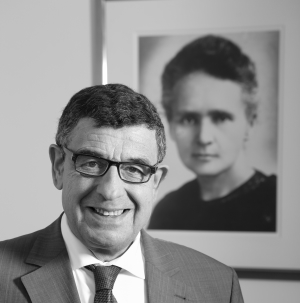 On October 24, 2017, Eric Favereau of Liberation interviewed the eminent Chairman of the Board of Directors of the Curie Institute in Paris, Professor Thierry Philip. The focus of the interview was how to control the unsustainable increase of cancer drug prices. The journalist asked many interesting questions that need to be asked, among them: was Prof. Thierry Philip worried about the cost of cancer drugs today? What would he recommend we do about it? What concrete actions could be taken now? What should be done specifically about the expensive drugs that sometimes do not add much time to the lives of patients? What to do regarding the ever more expensive drugs of the future? What should patients’ involvement be? And why are radical reforms possible or not possible now?

While Prof. Thierry Philip expressed some serious concerns and suggested some ways to change the dangerous trend of spiraling high prices, he first acknowledged that, at least in France today, the government is coping with the high prices and access is sometimes delayed, but not threatened. However, one of his concerns is the rapidity with which the prices are increasing. He pointed to the fact that today, in France, the cost of cancer is about 15 billion euros, but that this includes everything and the drugs are “only” costing about 3.5 billion of that amount. But some projections show that in 2025, the cost of cancer drugs alone could go up to 10 billion euros and this, for Philip, will become quite unsustainable.

Philip makes three important suggestions to address the cost of cancer treatment: 1) we need transparency of the real costs of research, development and production, 2) based on this evidence, we need delinkage of the R&D costs from the price of the medicines, and 3) we need to hear the voices of cancer patients.

Of course, the devil is in the details.

When asked about the example set by the National Institute for Health and Care Excellence (NICE) in the UK to not approve the reimbursement of some innovative, but deemed too expensive, cancer drugs as the drugs “only add a few weeks of survival”, Thierry Philip was diplomatic but clear. For a patient, even 2 months of survival can be essential. Of course, it is all quite delicate since there is “survival” and “progression free survival” as well as the quality of life for the patient! Philip is also in favor of continuing experimentation with new molecules and notes the difference between drugs for first line use or for use later in the progression of the disease. He mentions Keytruda, used for lung cancer, which resulted in 40% of patients experiencing 3 to 4 years survival for inoperable cancer, while 5 years survival before Keytruda was at about 5%. According to him, for some oncologists the progress is amazing, even revolutionary, and they tend to say if it is expensive, it must still be available and thus paid and that is someone else’s problem. In some situations, for Thierry Philip, there is no real therapeutic improvement and we must ask questions.

Philip explains that as it stands now, (basically) the publicly funded labs make a discovery, apply for a patent, and create a startup, all with taxpayers’ money. If it works, the private sector takes over, he says. We need transparency regarding this process. According to him, firms state that they have 10 molecules in the pipeline but only one will work. Perhaps this is true, Philip states, but in that case it should be verifiable and we should be able to check out how much it really costs so we can separate the cost of R&D from the cost of the production. It should be common sense. But this is not possible without transparency and we are not there yet.

For Philip there are two other possible solutions: one is nice, the other less so. Imagine in 2025, society cannot pay the high prices. So we have to pay on longer terms. Instead of getting a 10 year license, it’s for 20 or 30 years. The patent terms get longer and longer.

Another solution, more radical according to Philip, is to issue compulsory licenses. The pharmaceutical industry is told that if the prices do not decrease, the government will issue a compulsory license, authorize generic competition and they will “lose everything”. Of course for Philip this is the nuclear option.

As a patient myself, this does not seem like the nuclear option but the option that puts patients’ lives first. Again, why is it so much easier to say no to patients than to say no to the industry? And of course, the interview continues with the call for getting more cancer patients involved. Am I the only one seeing the irony here? Often cancer patients are asked to endorse a system that sacrifices their survival either by ensuring high prices and/or rationing. However, one correct observation by the eminent Curie Institute Chairman regarding patients is that cancer patients should look at the HIV patients’ example and require transparency to get better prices and access.

The interview ends with a question about personalized medicines and gene therapies. Are they disappointing? Not so, or not yet, states Philip, and he suggests the therapies should be used earlier in the progression of the disease. Furthermore, we have to be patient, as sometimes progress involves uses that were not planned at first. We have to wait and see, he says, but there is great therapeutic progress ahead.